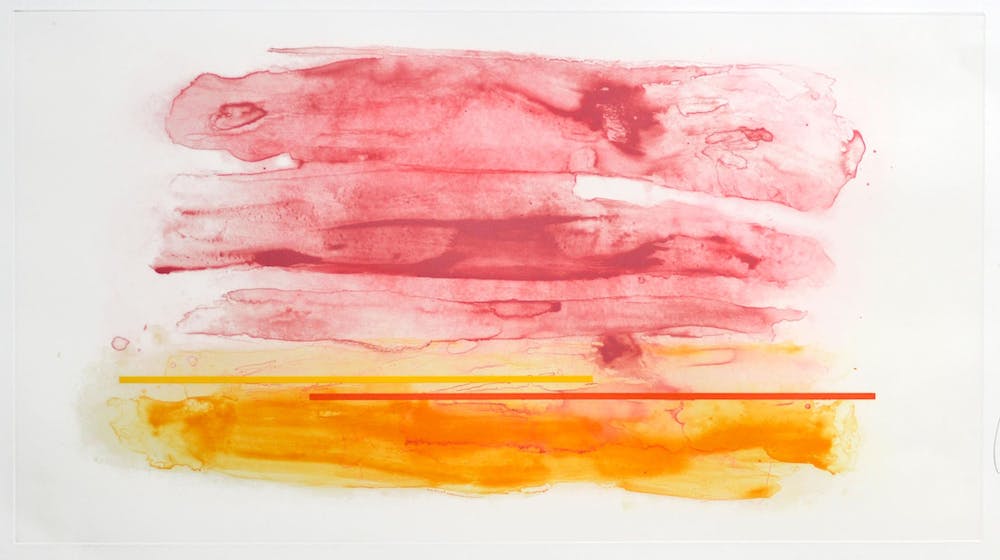 In 1979 when I was living in London, with the help of Dr Eric McCormick I managed to secure a Reader’s ticket for the British Library where I subsequently made an appointment to view several of Turner’s ‘colour study’ sketchbooks. These were delivered to the table with a small easel, along with a pair of white gloves and for the rest of the morning I was immersed in his floods and patches of transparent watercolour: luminescent, radiant and mysterious. They bordered on abstraction (proto-Rothko) with often just the merest suggestion of a horizon or sea- edge, or beach or breakwater wall; the evanescent colour spilling into areas for sky or land, sunsets and sunrises all executed quickly and on a small intimate scale. A perfect viewing experience that made a deep impression on me, and now 37 years later those recalled sensations have tumbled out into these four new prints.

In 2015 I was introduced to the master printmaker Pete Kosowicz at Thumbprint Editions whose print workshop in Camberwell, London turned out to be a 5 minute walk from my studio. I must have passed the anonymous big solid metal gate many times over the past 15 years without knowing what lay behind it. In May of 2016 I returned to Thumbprint Editions with the intention of making a print. I had allotted three weeks for workshop time which before starting seemed more than enough, but as it turned out, my ideas tumbled forth and the one print multiplied into four.

Pete got me working in this new (to me) print-making method on large sheets of polymer acetate. From these he made test printouts in black, which I then cut up and collaged together until I had composed an image that I connected with and that rang true for me. This was then transferred to a plate and etched. At this point I was assigned a printer - Marta Gonzalez - a young Spanish printmaker, one of 6 assistants that Pete employs to edition the prints. With Pete’s involvement and guidance Marta stood daily at the big press and patiently and skilfully inked up, wiped and trial-proofed variations of colours on each plate until we found the combinations that ‘worked’, or ‘spoke’ for each of my four images. We worked as a team every day right up until 5pm at the end of the third week to achieve the BAT proofs. (BAT = Bon à tirer - ‘good to pull’). In my absence the editioning by Marta took place over the following three months, and I returned to London in September to sign, title and edition number the four sets of prints.

The whole process was exhilarating and allowed me to fuse the fluidity and ‘nature’ references of my 1970’s paintings with the geometric interstices and multi-part paintings of my recent works, utilising a collaging technique that has always been part of my practice.